The No.1 Place Americans Shop Chinese Herbs
Free Shipping over $50 for US orders

Free Shipping over $50 for US orders

There’s a common misconception that plants are totally safe. Socrates would most certainly disagree. Accused of corrupting young Greek minds, the Greek philosopher was executed by swallowing a concoction of hemlock. Socrates’ demise serves as a cautionary tale that some plants (and their constituent chemicals) are so deadly they should never be used as medicine.

And then there are some select botanicals out of the 50,000 or so medicinal plants in the world that have recently received a bum rap. That’s because after having been used safely for thousands of years, they were used inappropriately in modern products, forcing regulatory agencies such as the FDA to ban their use.

Another category of herbal remedies that one should proceed with caution are Chinese herbal supplements that if not properly processed can cause adverse reactions.

Chinese herbs have a record of being safe and effective for thousands of years—provided the dosage, length of time taking the herbs, and preparation methods are strictly followed. Unfortunately, some of these herbs have been used inappropriately in modern times, especially in weight loss supplements.

In 2003, a high-profile death of a Major League Baseball player occurred. Steve Bechler, a 23-year old pitcher with the Baltimore Orioles dropped dead while participating in conditioning drills during spring training. Bechler’s death was largely attributed to a weight loss supplement, which contained the active ingredient, ephedrine. Ephedrine is a chemical derivative of Ma Huang (ephedra), which is one of the oldest herbs in traditional Chinese medicine (TCM), dating back over 5,000 years.

In TCM, Ma Huang was not used for weight loss or as an appetite suppressant. Rather, it was used to remove excess heat from the body and support the respiratory system. At very high doses, ephedra is toxic and acts as a stimulant, owing to its ephedrine alkaloids. Some people who used weight loss supplements containing ephedrine did so for months. Because of negative publicity surrounding weight loss stimulants with ephedrine, Ma Huang was banned by the FDA in 2004 for use in dietary supplements.

Chinese herbs have a record of being safe and effective for thousands of years—provided the dosage, length of time taking the herbs, and preparation methods are strictly followed.

In TCM, remedies with Ma Huang were not intended to be used for such a high dose and a lengthy period of time; the herb was meant only to be used briefly until the body was back in balance. In TCM, with normal use, Ma Huang poses a low risk for side effects; ephedrine accumulation in the body is minimal when this herb is used appropriately. In compliance with the FDA, ActiveHerb does not import Ma Huang, and none of our formulas contain this herb.

We also do not carry herbs or formulas that contain aristolochic acid (AA). This compound from the aristolochia plant, of which there are over 500 species, may be toxic to the kidneys and the urinary tract—when used for an extended period of time. The TCM herb Ma Dou Ling (birthwort fruit) is one such herb that contains AA. When used appropriately, the herb is also used to clear toxic heat and support the respiratory system.

Out of any Chinese herb, this one arguably has the most curious English name: Thunder God Vine (Lei Gong Teng). ActiveHerb is often contacted by customers inquiring whether we sell this herb. Our answer is that due to its potential toxicity, we recommend people not take it. In TCM, it is well reported that this herb may cause serious side effects, despite any positive effects it may have. ActiveHerb does not carry this Chinese medicine nor any formula that contains the herb.

Chinese Herbs That Need To Be Detoxified Before Use

Some Chinese herbs have inherent toxicity. A reason aconite is one of the most toxic plants on Earth is because it contains the compound, aconitine, which is a neurotoxin. (A sure sign that you’ve ingested aconitine: numbness of the mouth and tongue.)

You may be surprised to learn that ActiveHerb carries aconite herb in several of our formulas, including our digestive support formula, MidwarmerMidwarmer. The Chinese name for aconite is Fu Zi, a main herb in TCM for tonifying Yang energy and warming the body. But before you get scared away from Fu Zi, realize that with proper processing, the toxicity of the herb is greatly reduced to safe levels; the herb is processed and becomes Zhi Fu Zi (“Zhi” means “processed.”)

Besides aconite, a select few other herbs need to be properly detoxified before use. These include He Shou WuHe Shou Wu (Fo Ti) and Ban Xia (Pinellia). Processed Fo Ti, the chief botanical in our HairViveHairVive formula, tonifies the Kidneys and Liver, nourishes the blood and augments Jing, while Ban Xia dries dampness and transforms phlegm.

How Chinese Herbs Are Properly Processed

Ancient TCM doctors developed methods to reduce toxicity, while maintaining the beneficial properties of the herbs. For instance, to safely remove aconitine, Fu Zi is traditionally steamed, soaked in brine, and repeatedly rinsed in flowing, pure water. These days, an easier but just as effective way to detoxify Fu Zi is to boil the herb in water for several hours.

It is interesting to know that nowadays, when we measure the level of aconitine before and after the processing, it confirms that aconitine is indeed destroyed after processing. Apparently even though ancient TCM doctors had no way to identify this toxic compound yet they had innate wisdom to find out ways to detoxify the herb before use. 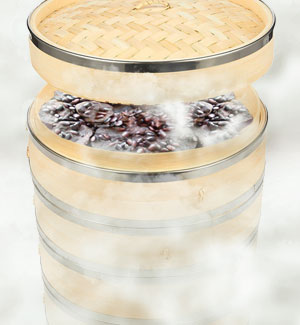 Perhaps the most interesting processing method of any Chinese herb is that of the legendary, aforementioned He Shou Wu (polygonum multiflorum). He Shou Wu needs to be steamed in black beans for nine rounds in order to remove its laxative side effects. The herb, when properly processed, strengthens the Liver, which is the source for Blood, which in turn nourishes the scalp and hair.

Suggested Reading From The ActiveHerb Blog: